So what are the High-on-the-Hog cuts? 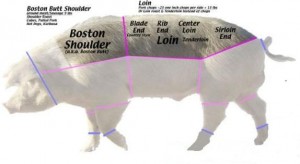 Having Your Pork Chop and Eating Tenderloin too?

Note that you can’t have your cake and eat it too. That is to say, in some cases, making a particular cut precludes making others. For example, bone-in lower loin chops contain the tenderloin the way it is normally cut at the butcher. You could get a whole loin, preferably chine-off to make cutting easier, and then strip the tenderloin and have tenderloin as well as semi-bone in chops. But with normal pork chops the tenderloin is that little eye of meat so that makes it no longer available as a whole loin. Likewise if you get bone-in pork chops from the loin then you miss out on baby-back ribs because they are the bone in the chops.

With meaty spare ribs you lose the chest bacon. Meaty spare ribs are wonderful, especially smoked, but if you cut your pig that way then it leaves just belly bacon. Another example is Boston butt roast vs shoulder steaks. These are both cut from the same meat where three muscles at the top of the back come together layered with delicious fat. Some people want this for making pulled pork, othersfor a roast, some get pork steaks.

Website and Online Farm Store Powered By Eat From Farms