So what are the Middle-of-the-Hog cuts? 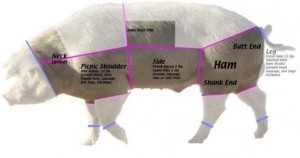 These cuts are next down in the economic tier and they literally come from the middle of the pig. Many of these are made into delicious, and very high priced, products through additional curing, brining, smoking, drying and other processing. Think bacon, hams, prosciutto, sausages, hot dogs, salami, etc.

Each of these requires some additional work to produce the final product. These steps result in loss of water and trim (shrinkage), cost time and money all of which drives the price up and concentrates the flavor.

This uses portions of the pig that aren’t in high demand as cuts and turns them into delectable dining. Everyone loves bacon — vegans speak of it in fearful whispers, calling it “the gateway meat that tempts people back to the traditional, sustainable, omnivore diet.” Understandable.

What are the Middle-of-the-Hog cuts?

Website and Online Farm Store Powered By Eat From Farms